It seems as though every other week there’s a new marketing buzzword or practice that’s “guaranteed to improve your business.”

Most of the time, these new fads are simply that. A fad. They have their 15 minutes in the limelight before retreating to the darkest corners of marketing history. Their only support following their demise comes from diehard fans unable or unwilling to let them go.

There’s plenty of hot-button topics in the world of online marketing right now, but out of all the various approaches out there the one that deserves your time and attention the most could well be account based marketing (ABM).

ABM is an approach that has been used for the last 20 years. It’s different from the marketing fads that are quick to rise and quicker to fall as it’s proven itself time and again to be a viable, profitable approach to marketing. The lack of coverage can largely be attributed to a shortcoming in marketing technology. Now seems to be the time for ABM to have its huge breakthrough. Momentum behind the approach has been gaining over the last few years. A resurgence is popularity is just around the corner, and it couldn’t have come sooner.

There’s a surprising number of marketers out there who aren’t as familiar as they should be with ABM. For those and anyone else who wants to learn a little more about the approach, we’ve put together this article explaining what it is and why you should care.

Account based marketing is a term most often associated with B2B marketing and sales. It focuses, unsurprisingly, on marketing at the account level.

We’re all familiar with the traditional marketing approach. You examine your channels, see what gets the best results before altering your campaign to better align with the behavioral habits of that channel.

The problem with this method? It’s often a generalized view. You end up marketing to the channel not directly to your best prospects or the people likely to buy from you. This is where ABM differs and shines.

It completely forgoes targeting by channel and turns everything on its head. ABM begins with the identification of key accounts (group of people). Once your key accounts have been identified, you target your marketing to their needs and reach out via the channels that they’re actively using. The result is a more targeted campaign that reaches straight to the desk of your primary decision makers.

Marketers who have always taken he traditional approach may well find this a difficult shift to adopt. However, marketing to key accounts rather than to channels where key accounts might see your message has proven to be the more successful marketing method.

Account based marketing offers numerous benefits to a business. Below we’ve listed the two chief benefits that are often the deciding factors for marketing managers.

1 – It allows for a more targeted campaign that better appeals to key decision makers. According to ITSMA, who coined the term account based marketing in 2004, “By treating each client as a market of one, you can broaden and deepen your relationships with individuals at key accounts as well as increase awareness and demand for your services and solutions. This ultimately leads to more strategic sales and greater revenue generation.” Basically, you’re forming deeper relationships with the most profitable prospects you have.

2 – B2B decisions are rarely made by an individual. B2B sales cycles are long, arduous battles that go through many stages before a final decision is made. Traditional marketing may reach one key decision maker at a time. It’s a scattershot approach that isn’t as effective as it could be. ABM, on the other hand, can be used to target all key decision makers at once, providing greater impact and a faster journey to sale.

At its core, ABM aims to create a completely aligned process through both marketing and sales. It offers a more cohesive journey for both the prospect and your internal sales and marketing teams.

Of course the regular steps of tracking progression, metrics and mapping the proper journey still apply. It’s just that you’re now working with a far more targeted group who are not only more motivated to purchase, but also more likely to resonate with your new messaging.

Why Did it Take So Long to Gain Traction?

It all sounds so great, doesn’t it. Better alignment between marketing and sales, higher conversions and all around happier prospects. So why, if the coin was termed in 2004, is it only gaining momentum in the last few years?

Well, let’s first go back to where it began. The term account based marketing was coined back in 2004 by ITSMA, but the actual process has been in use since the mid-90s.

Brands including Xerox and HP were some of the early adopters of the method. Noticing the sales close rate for single leads to be pretty low they decided to shift the focus for their sales teams. Instead of focusing on pursuing single leads, they were encouraged to focus their attention on accounts, or groups of people.

This shift to account focused sales would, of course, require a shift in marketing practices as well. Everything was turned on its head. Processes had to be re-written, staff retrained and the overall focus of two internal departments amended, monitored and continually optimized.

Needless to say, it’s not an approach that many could afford to experiment with.

As such, the only real adopters for much of the time ABM has been around are large multinationals. The brands who have the budget and manpower to experiment with. The small and medium enterprises of the world simply didn’t have the tools to allow them to run an effective account based marketing campaign.

However, that’s no longer the case.

Over the last decade marketing tech has come in leaps and bounds. There’s a huge selection of marketing automation services out there which allow small and medium enterprises, as well as ambitious entrepreneurs, to run successful account based marketing campaigns. 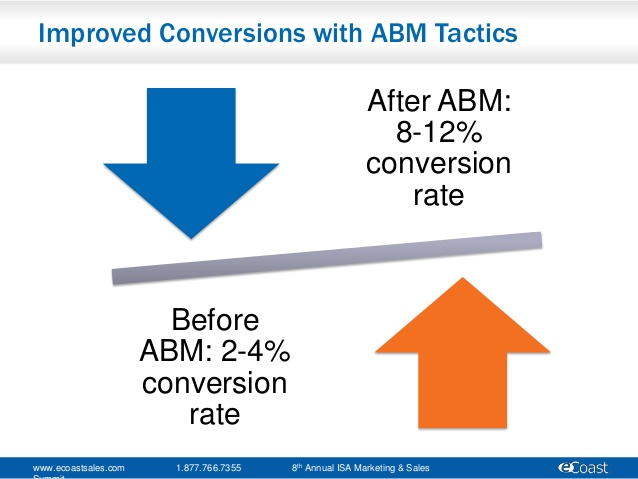 Account based marketing is no longer a method for big business only, and the smaller businesses out there are starting to take note. Earlier in the year, SiriusDecisions released its State of Account Based Marketing Survey. According to that survey;

– 92% of companies recognize the importance of ABM

– 52% of companies currently have a pilot program in place

– 20% of companies have had an ABM campaign in place for over a year. However, 60% are planning on investing in technology for ABM

The proliferation and development of online marketing services have opened the ABM doors to all. The ability to implement an ABM campaign has caused marketers across the globe to sit up and take note.

ABM is an approach quickly growing in popularity and seems set to take center stage in coming years.

It’s Growing in Popularity, But What Are the Benefits?

Switching from a traditional marketing model to account based marketing is a daunting thought for most. Scrapping what’s already in place to implement a brand new structure is a huge undertaking.

However, nothing worth having comes easy. Implementing a strong account based marketing campaign could drastically affect the success of your businesses marketing. While by no means an exhaustive list, below we’ve included a few of the key benefits those who implement an ABM campaign experience.

1 – An Increase in Revenue

Let’s start with the big one.

ABM focuses on the most lucrative accounts and most qualified prospects. Sure it’s a lot more work than rolling out a generic channel campaign, but it’s also one that brings in a much higher return.

You’re not wasting your time by marketing to those who won’t be interested in what you’re selling. There’s very little wastage. It’s a great method for gaining a higher ROI from your campaigns.

The image below from DemandMetric outlines the potential gains from ABM. While at first glance there’s a huge percentage of brands who report zero impact, the full report describes how that 40% consists only of brands who haven’t fully aligned their sales and marketing processes. Basically, they’ve not fully committed to the process. The one downside is that you could overlook less lucrative, but still important accounts. While these less lucrative accounts might not offer the ROI of the larger prospects, they can still add to your bottom line.

2 – It Gets Everyone on the Same Page

Anyone who’s ever worked on a sales or marketing team can attest to the relationship between the two. Very rarely do sales and marketing work in perfect concert.

The aligned approach not only works to create a better experience fro your prospects but also for your in-house teams. Account based marketing allows both sides of the equation access to information on lead generation, lead importance and current progression with individual leads.

Marketing teams won’t waste time attracting what sales report to be poor quality leads. No more lost leads because they were passed on to the wrong person.

ABM allows for a smoother, more profitable progression of lead development from initial capture to final close. It basically brings everyone in-house together.

Channel marketing is a great way to get your message out there in front of as many eyes as possible. But you’re only really interested in a very small set of those eyes, the ones belonging to your key prospects.

When marketing by channel the interaction and response to your messaging from unqualified leads has the potential to screw up your data. Do you care that those who have no use for what you’re selling bounced from your site? Do those stats help you optimize for the future?

Not really, because those people, no matter how persuasive your future marketing will never buy because they simply have no use for your product.

Using that data to optimize your campaign won’t bring a meaningful lift. You need to focus on what makes your key prospects and accounts purchase. Discover what are the key selling points for turning key prospects into key customers and you’ll see an improvement in sales.

Account based marketing helps to cut out the noise from unqualified leads. It gives you actionable data.

Despite being around for 20 years, ABM has been largely overlooked.

It’s understandable, really. It was never overlooked because it didn’t work or even that there was potential but too many issues. ABM has always been a solid earner. The problem lay in the ideology being ahead of its time. It was inaccessible to the majority of brands because they did’t have the resources to effectively implement a campaign.

However, that’s all changed now. Thanks to tech developments ABM is now a feasible option for any brand of any size. The reports from brands who have fully aligned their sales and marketing processes provide a glowing reference for ABM reporting, at the very least, a 10% increase in revenue from its implementation.

ABM seems set to be the next big thing in marketing. Now is the time to jump on the wagon with the rest of the world’s savvy marketers.

If you want to learn more about how to implement a successful ABM campaign, take a look at our free white paper download right here.